The Bronx divorce attorney Juan Luciano releases a new article (https://divorcelawfirmnyc.com/bronx-divorce-lawyer/) that discusses matters that are involved in the divorce process in New York. The lawyer says that divorce can be hard for many couples, no matter how friendly they might seem.

According to the Bronx divorce attorney, "Just like marriage sets the course for your emotional and financial future, so does divorce. But unlike marriage, you are going into a divorce with a different mindset and have different needs, both for yourself and your children." 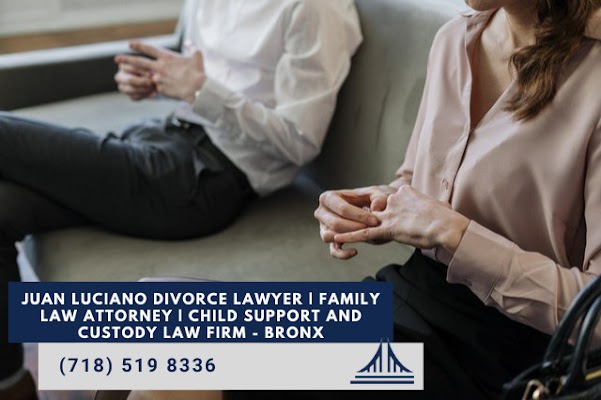 The lawyer explains that there are two options for a divorce. The first option is an uncontested divorce and the second one is a contested divorce. Uncontested divorce refers to a situation in which the couple is able to reach common ground and solve issues such as child support, property division, and child custody on their own.

Attorney Juan Luciano mentions that the most difficult part of any family law or divorce case is determining parental responsibilities to children. Each party should be familiar with the details surrounding child custody. Legal custody can be divided or shared, but the court will determine which option is best for the child.

In the article, attorney Luciano also mentions alimony (or spousal support). The lawyer says that alimony can be described as a financial payment made to one of the parties in accordance with family law. The support can be received in one lump sum, or in smaller amounts. New York offers three types of alimony: permanent, institutional, and rehabilitative.

"The financial support of your children is essential to their future and well-being. According to New York family law, children must be financially supported until they reach the age of 21 or are otherwise emancipated. In NY, child support is calculated based on set guidelines that consider both partners' gross incomes. It further considers which parent is the custodial parent," says the divorce lawyer.

Lastly, the Bronx lawyer emphasizes the importance of having a skilled divorce lawyer when it comes to matters like child support and custody. Having an experienced lawyer may be able to help the client explore their options and make the best decision that will benefit the family.

Juan Luciano has spent his career in the complex legal world of family law. He has earned a reputation for excellence at the negotiation table as well as when in court. He is also fluent in Spanish. Contact them today at (718) 519-8336 to set up an appointment for a consultation with Bronx family law attorney Juan Luciano.