New York - Experienced New York car accident lawyer David S. Leigh talks about car accident laws in his new article. He mentions that a lot of people are injured and suffering from injuries due to car injuries every day. There can be minor injuries but there are also injuries that last forever, while some accidents even end up in death.

In Mr. In Leigh's new article, he also talks about the statistics of car accidents in New York City. He states that in 2020, the city averaged 303 auto accidents every day. The division of these accidents by their percentages is 31.7% for Brooklyn, 29% for Queens, 19.4% for the Bronx, 15.5% for Manhattan, and 4.2% for Staten Island. 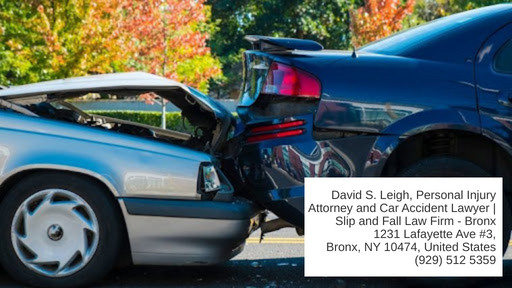 Furthermore, the car accident lawyer also talked about the seven most important things needed to do when involved in a car accident. This includes: calling 911, staying calm, assessing oneself for any injuries, getting as much information as possible, seeking medical attention if needed, and not speaking to any lawyers who visit the hospital unsolicited or to anyone who works for lawyers at the hospital.

He also discusses who should be held responsible for car accidents. Attorney David Leigh says that each driver will first look to their own car insurance and personal injury protection coverage to file a claim, regardless of who caused the accident. He added that if an individual has been seriously injured, they can hold the at-fault driver accountable for the damages and seek compensation from that party or their insurance company in a personal injury claim.

Lastly, he elaborates on this article how a person can file for an injury claim even if they were partly at fault for the accident. He mentions that it’s because New York is a comparative fault state. In a comparative fault state, the plaintiff (a victim of an accident) can get compensated even if they are partially at fault. The car accident lawyer adds that if the behavior of the at-fault party was particularly egregious, there may be cause for the court to order punitive damages. These are awarded to solely punish the negligent party for their behavior.

Crypto Spotlight: Meet AccoinGreen, the new kid on the blockchain

Innova Makes It Easy For SC Businesses With Accounting Services

Goosehead Speaks Out About Importance Of Flood Insurance

WaxDynasty.com Examines the Possibility of a Disney Metaverse in the Future