Brazil and Argentina are discussing whether to combine currencies 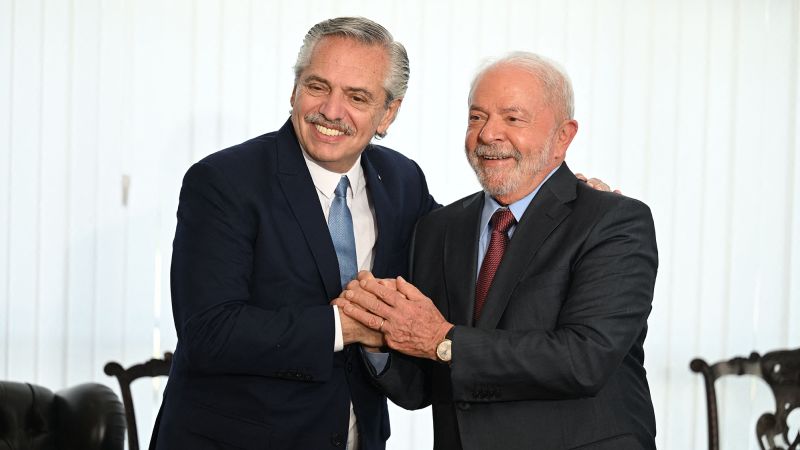 London CNN —The two biggest economies in South America are starting talks to create a common currency.
At a press conference in Buenos Aires, he said establishing a common currency for trade would reduce reliance on the US dollar, whose sharp ascent last year was painful for countries around the world.
“If it depended on me, we would have external commerce always in the same currency of the other countries so we wouldn’t have to depend on the dollar,” Lula said.
Brazil’s finance minister, Fernando Haddad, downplayed the scope of the idea in talks with reporters, according to Reuters.
“Trade is really bad and the problem is precisely the foreign currency, right?
So we are trying to find a solution, something in common that could make commerce grow,” Haddad said.
‘A bridge too far’The two countries are both part of the Mercosur trade bloc, which also includes Paraguay and Uruguay.
Talk of creating a common currency has periodically cropped up since its founding in 1991.
Still, investors are doubtful efforts to create a common currency in the region will gain much traction.
“For Brazil and Argentina, it really does seem a bridge too far.”Brazil — dealing with a sharp run-up in interest rates — faces with a steep slowdown in growth this year.
Argentina, which defaulted on its sovereign debt for the ninth time in 2020, continues to be battered by crippling inflation.
“Brazil and Argentina are a long way away from the convergence in economic policy and performance required to launch [a] monetary union,” he said.
Source