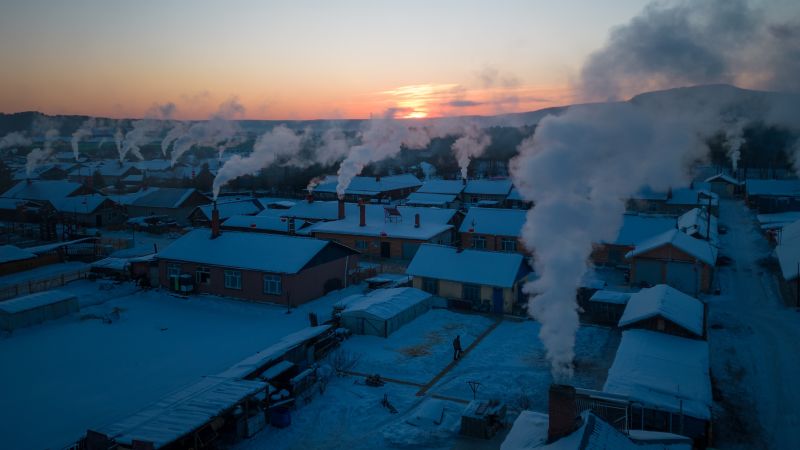 CNN —Temperatures in China’s northernmost city plunged to minus 53°C (minus 63.4 degrees Fahrenheit) – its coldest ever recorded, meteorologists said.
Located in the northeastern Heilongjiang province and nestled near Russian Siberia, Mohe is widely known as “China’s North Pole” and is one of the few places in the country to have a subarctic climate.
The temperature at 7am on January 22, also the first day of the Lunar New Year, registered at minus 53°C, according to the Heilongjiang Meteorological Bureau.
China’s meteorological authority has forecast big temperature drops in parts of the country and issued a blue cold wave on Monday.
In neighboring Russia, Yakutsk, which has the distinction of being the world’s coldest city, saw temperatures plunge to minus 62.7°C (minus 80.9 degrees Fahrenheit) – the coldest in more than two decades.
Winters in Mohe are long and begin in early October, often lasting until May.
In 2018, rare “ice fog” – a weather phenomenon that occurs only in extreme cold climates when water droplets in air remain in liquid form – gripped residents, prompting local authorities to issue the city’s first-ever red warning for cold weather.
No alerts have been issued in Mohe yet but local meteorologists say the cold snap would continue into this week.
In 2011, more than 10,000 tourists flocked to the city to observe the aurora borealis during the annual polar lights festival.
A highway connecting the remote city to the capital Beijing opened in December 2019 to much fanfare.
Just months ago, China saw its worst heat wave since 1961 – which prompted massive power cuts and even reduced rivers to drought levels.
The extreme heat stretched over 70 days and the impact was felt far and wide throughout large swathes of the country.
Source