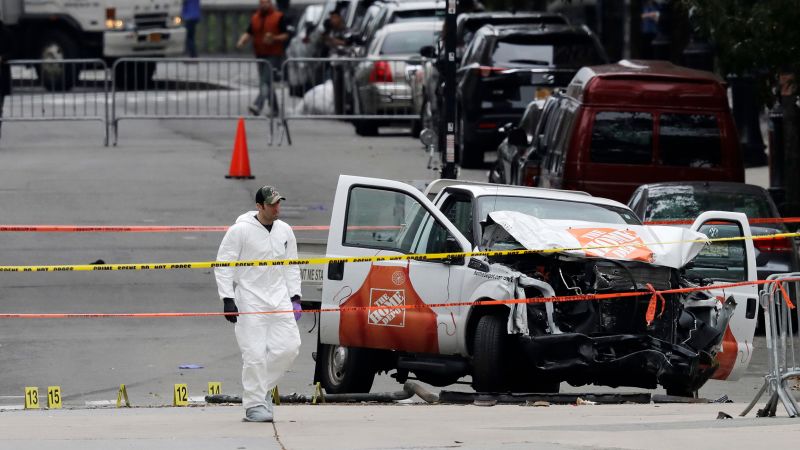 He indicated the reading of the jury instructions will take several hours before deliberations begin.
Defense attorney David Patton acknowledged in his closing argument that the defense does not dispute facts of the attack Saipov is accused of committing on Halloween in 2017.
“It is no defense ‘I was convinced by others to do it,’ nobody forced him to do this and he’s guilty of murder and assault among many other crimes,” Patton told the jury.
Six foreign tourists and two Americans were killed in the attack, the deadliest terrorist attack New York had seen since 9/11.
He was booked after a traffic violation on an outstanding warrant from another jurisdiction, according to a county corrections sergeant.
St. Charles County, Mo., Dept of CorrectionsThe defense attorney disputed, however, prosecutors’ claim that Saipov was motivated to commit the attack to gain entry to ISIS.
Patton also noted ISIS does not call its members “soldiers of the Caliphate” as Saipov has referred to himself, according to trial evidence, but rather identifies its members by another term.
The defense attorney said Saipov’s claim that an ISIS leader told him to commit the attack likely comes from a propaganda video recovered on his phone.
Buying into ISIS propaganda does not suggest Saipov had any direct contact or coordination with ISIS members ahead of the attack, Patton said.
Saipov faces eight capital counts of murder in aid of racketeering activity that could result in the death penalty if he’s convicted.
“I just hope you will see why it is so important for you to get that right,” Patton told the jury in closing.
Prosecutors told the jury in the government’s rebuttal Tuesday evening that Saipov must be convicted on all counts as they stand.
Source