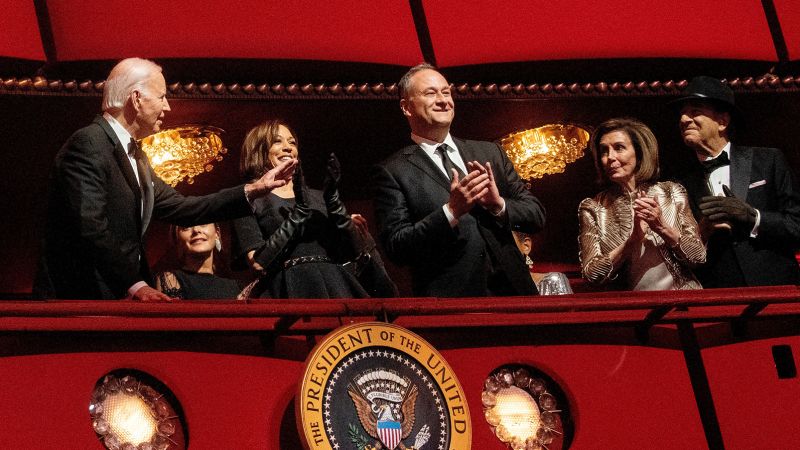 CNN —Paul Pelosi, the husband of House Speaker Nancy Pelosi, made his first public appearance on Sunday at the Kennedy Center Honors after being brutally attacked in late October.
House Speaker Nancy Pelosi and husband Paul Pelosi attend the 45th Kennedy Center Honors.
Saul Loeb/AFP/Getty ImagesPresident Joe Biden made a fist pump to Paul Pelosi, who was seated nearby, as he was walking to his seat with first lady Jill Biden.
Paul Pelosi was wearing a black hat as he recovers from injuries to his head.
Following the attack, Paul Pelosi had surgery “to repair a skull fracture and serious injuries to his right arm and hands,” Drew Hammill, a spokesman for Nancy Pelosi, said in a statement at the time.
Earlier Sunday, Biden congratulated the class of the 45th Kennedy Center Honors, welcoming them to the White House ahead of the star-studded event celebrating the American arts.
“Tonight, we celebrate a truly exceptional, and this is not exaggeration, a truly exceptional group of artists – group of artists who embody the very spirit of ‘we the people.’ This year’s Kennedy Center honorees – they’re all an incredible group of people,” Biden said.
Those being honored included George Clooney, Amy Grant, Gladys Knight, Tania León and all four members of the Irish rock band U2.
The 2022 Kennedy Center Honorees front row from left, George Clooney, Amy Grant, Gladys Knight, and Tania León, and back row from left, Irish band U2 members Bono, The Edge, Adam Clayton and Larry Mullen Jr. listen as President Joe Biden speaks during the Kennedy Center honorees reception at the White House.
Manuel Balce Ceneta/APThe honorees, selected for their contributions to American culture by the Kennedy Center’s Executive Committee of its Board of Trustees, were saluted at the Kennedy Center Opera House in front of their peers.
The Bidens’ attendance marks the second year that the first family continues the longstanding tradition that was interrupted during the Trump administration.
At the time, the White House said Trump’s decision would allow the artists “to celebrate without any political distraction.”Addressing the honorees Sunday, Biden wrapped his remarks with a message about unity.
Source